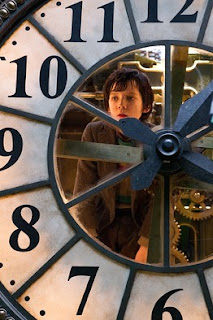 Do you want to go on an adventure?

Martin Scorsese, the academy award winning director known for movies such as Taxi Diver, Cape Fear, The Aviator, and the recent Shutter Island, will take you on his newest adventure, Hugo, his first 3-D film, to a world of steam; the chug of heavy coal engines; cool brass; dank, rusting iron; and the unforgiving wet winter Parisian streets of the nineteen thirties.

He’ll introduce you to a young boy with vivid blue eyes, Hugo Cabret (played by Asa Butterfield), orphaned by the death of his father and left by his alcoholic uncle to work alone behind the walls of a big train station, fixing and maintaining the giant clocks, his view of the world, lonely but perceptive from behind the clockworks.

He’ll show you a mysterious, mechanical man, an automaton, left behind in disrepair, and a notebook, both of which might hold a message from Hugo’s father.

You’ll meet a young girl, Isabelle (played by Chloe Moretz), with a key on her necklace; an officious inspector on a mission to rid the train station of orphans; and a bitter, old shopkeeper (played by Ben Kingsley) who snatches the notebook from Hugo’s hands.

The film features an impressive array of star power, including performances by Jude Law, Sacha Cohen, Ray Winstone, Helen McCrory, and many others—and for the Lord of the Rings aficionados: Christopher Lee.

The film is an adaptation of the book The Invention of Hugo Cabret, by the Caldecott award winning author, illustrator Brian Selznick. What’s special about this book is not only the 284 stunning pictures illustrating the story, but a fantastic tribute to the pioneer movie maker, Georges Méliès, who’s films were a veritable magic show of special effects. He was the first to experiment with science fiction and fantasy—recall the early 1902 silent film Voyage Dans La Lune: A Trip to the Moon. Its iconic imagery of a spaceship piercing the eye of the man on the moon inspired generations, and which also repeatedly appears in the both the book and the Scorsese film.

Méliès was also known to be a collector of automata (self-operating mannequins or robots that run on non-electronic complex clockworks or wind-up technology), which collection he donated to a museum only to be lost or destroyed by neglect. After making more than 500 films, he fell on hard time, the majority of his films being melted down to make boot heels for the military, and he spent the remaining years of his life selling toys in a train station. 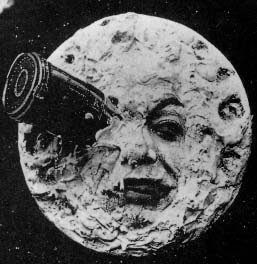 Iconic image from Voyage Dans La Lune--Voyage to the moon

Posted by Robert Goble at 1:02 PM No comments:

The original Grub Box lives on in Google...for now.

The Grub Box as it appears here is featured and described several times in my dark fantasy/horror in progress, Pony Rides the Sunbeam. This photo must have been taken around '08 before the little burger hop was torn down, and the business was moved behind the Rice King and a little to the west. My little bro., Mike was kind enough to send it to me--the poor guy gets a little nostalgic, having moved to the parched planes of Texas. I do admit, it sucks having no grub box there. 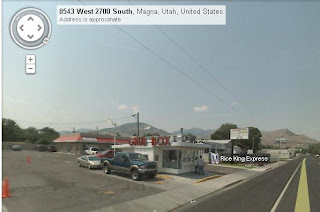 I took this photo less than a year later when this great old landmark was being torn down to expand the parking lot. I pity the poor soul who doesn't remember standing on that cement slab in the blazing sun or under the cool, bug-swarmed fluorescent lights on a warm summer night or in the freezing dead of winter to satisfy a craving for something on the surprisingly large menu--perhaps a Grub burger, onion rings, and a shake. 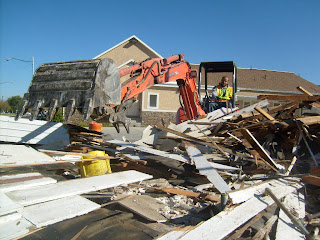 Where the Rice King and the police station now stand, there used to be tall elm trees and picnic tables. Many a Cyprus high school student had come down to enjoy the shade, a pastrami burger, and the good company of friends. Like the Arctic Circle on 8400 West or the unforgettable Taco Time next to the old Reed home on the corner of Main Street and across the road from the old 7-eleven, it wasn't uncommon to see friends working there--and maybe to score a free ice cream or Coke.
Though I remissness in the past tense, it's for the landmark and not for the restaurant itself. The grub box still thrives about a hundred yards to the southwest of where it once stood. The food's still great.
Another note about Magna nostalgia is if you travel directly to the south, as the crow flies, over house tops, over Brockbank jr. high, then take a slight turn east at 3100 South, you'll land on Ken's Sandwich shop. It's still there, but run by different management today. Thirty plus years ago we would leave swimming lessons at the Cyprus pool, and on our way home, stop at Ken's for a sandwich so thick in meat we could hardly finish it. His tables, especially the one closest to the door, were covered in graffiti, scratched with thousands of names and mysterious messages left behind by generations of kids who'd enjoyed friendly moments over a bag of Funyuns, a Dr. Pepper, and a Turkey Sandwich with everything on it. I particularly remember the epic: "Michelle is a fox!" Who was Michelle, and why was she a fox?
In my novel-in-progress, Pony Rides the Sunbeam (Update: since this was originally posted, I have changed the name of the novel to In Older Worlds), a group of people flee a Manson-like commune back in '69. Something dark follows them and takes an interest in their children. Forward to '84, and you have a group of teenagers running around Magna and the west side of the Salt Lake valley, experiencing strange things, and discovering something special about their lives.
Posted by Robert Goble at 7:16 AM 1 comment:

Robert Goble's Blog: Whittling and Magical Doorways: As I think of ways to describe a town punctured with magical doorways to a hidden world, my boy takes an interest in pocket knives. I figur...
Posted by Robert Goble at 2:16 PM No comments:

As I think of ways to describe a town punctured with magical doorways to a hidden world, my boy takes an interest in pocket knives. I figure he's old enough to learn to safely whittle under my supervision, so we both select a stick from the woodpile behind the house, then set out on the road to find a quiet place where I can teach him the art of whittling.
We drive around the West Point of the Oquirrh mountains--all the while I point out landmarks like Dead Man's cave, the site of the old Arthur mill at Kennecott where my grandfather worked as a welder for forty years, the old, crumbling concrete highway along the hill, Goshute Indian and pioneer camp sites, Black Rock and what's left of its beach, and many other sites riddled with my own memories of my own father taking me for rides along that same highway.
We soon pass the Great Salt Lake, and I fight the sun with my visor. My boy talks of everything that seems to come to his mind, and I listen and smile and try to pay attention to both him and the traffic. I turn off the highway at Lake Point (still thinking of magical doorways) and follow a small road lined with dry fields and old homes. We reach the foothills of the same Oquirrh mountain range, but on the west side that overlooks the Great Salt Lake and the Tooele valley--our destination. After a small hike, we find a place to sit on an outcropping of ancient, fossiliferous, Pennsylvanian-era limestone, and we pull out the pocket knives and begin to whittle together under the sunset. 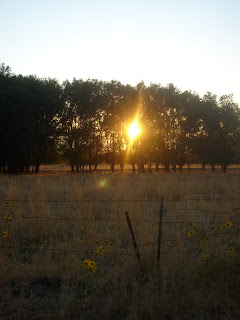 Reds and oranges are beginning to spread through Coon's canyon in the Oquirrh Mountains. The earth, in its Autumnal Equinox, dances with the sun, and around my house bright September light shines through trees that seem at rest. I breathe cooler air and lay hung over from a night of coughing and phantom nerve pain in my neck and shoulder. I stare at a plate of potato hash covered in ketchup, take a sip of orange juice, and my head nags me for caffeine and dark chocolate. Ideas for a new chapter begin to form, and as they do, I turn to Francesca Woodman and Joyce Tenneson for inspiration.

Posted by Robert Goble at 8:59 AM No comments:

To see the photo by Vadim Stein, click here:
http://2photo.ru/ru/post/24576
http://14991.portfolio.artlimited.net/
This September couldn't be more beautiful. The sun and temperature are the most friendly they've been in a long time for a Sunday walk, and I'm behind an open window, listening to cars pass, and fighting off a cold. But I'm also thinking about how to finish one of the largest chapters in my new novel, a dark fantasy called: Pony Rides the Sunbeam.

My mind seems to be drawn to dance, especially ballet. I watch stories told in pantomime, grace, and fire, and I fantasize of being a dancer. Something about a Vadim Stein photo of two dancers encapsuled in fabric haunts me for several minutes, then Tchaikovsky's Swan Lake catches my eye. It's the scene where Prince Siegfried sees Odette as a swan on a lake. It's a dark and magical moment. I let the story pass, but grasp the feeling. That's what I want: the feeling.

Posted by Robert Goble at 12:02 PM No comments: