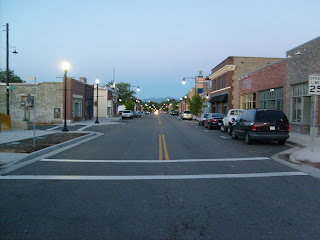 Posted by Robert Goble at 9:41 PM No comments:

Email ThisBlogThis!Share to TwitterShare to FacebookShare to Pinterest
Labels: facing East., Magna Main Street in the evening
Ever heard ghost stories about Magna? The history here is rich, so there are plenty of old houses, former settlement sites, old graves, closed doors, and boarded up windows to speculate about.
West of the corner of 9150 West and 2700 South (Magna Main Street), you'll find the site of the old Webster elementary school built circa 1914. It burned down several years ago, and now a new senior citizen's center has been built there. Beyond that, under the hill with the white C (stands for Cyprus high school), you'll find the old site for Ragtown, where old Kennecott company housing once stood. It's no longer there, of course, but some of the old folks who lived there remember hard conditions, including flooding, disease, and poverty--one of the reasons The Pleasant Green cemetery has so many unmarked graves. They're mostly babies from immigrant working families.
For most of us who grew up in Magna, we think of that area as the "Flumes" or the "Flues," depending on what side of town you came from. Water from the old industrial sites would pour down from the hillside through an aqueduct of sorts. It would fall into a pond lined with crusher bearings. The local kids had a sport of trying to slide down the aqueduct and catching one of two boards before falling into the pond--you could never see what was actually at the bottom of that water. I remember swimming there. The water would leave a gray film over everything it touched. We'd also hunt frogs along the canal that ran through the area--and let me remind you this was all private Kennecott property, so it was a risky practice of trespassing.
Some people said the place was haunted--whether it really was or not is a matter of opinion, and I'm the skeptical type, who tends not to believe in ghost stories. I just like telling them. But anyway, I remember hearing the story about a guy (lets change his name) named Louis Maestas. He was several years older than our crowd, so he would have had to be in his mid-twenties around the time that this story would have taken place. I remember being in junior high, so that would have been in the early eighties.
Louis was a local thug, to say the least. I remember his long, dark hair and criminal reputation. It was common knowledge he sold drugs, stole cars, and was in and out of jail. No one, except people like him, wanted to be around him. His trouble had a way of rubbing off on you.
As the story goes, he went on a drinking binge and wrecked his car in the ditch along 9150. Witnesses say after abandoning it, he supposedly wandered into the flumes west of Webster elementary and disappeared. Some people thought he'd committed suicide; others thought he finally skipped town. He showed up several days later in his back yard ranting and howling like a maniac. It was early morning, before the sun had risen, and his mother went out the back door to see what the commotion was all about. As he tore at his filthy clothes, the same ones he was wearing several days before, he babbled about ghosts and demons and horrible visions down in the trees along the canal.
Of course nearly 27 years later this story has become inspiration for the novel I'm currently working on.
Posted by Robert Goble at 8:53 PM 1 comment: