Where does Cyprus High School get its name?

The Myth Versus the Facts
Cyprus High School (Cyprus Junior High at the time) wasn't named by Greek immigrants nor was it named in honor of them. That's a myth.

The Greek mill workers were new to the area in 1917, when the decision to name the new junior high school was made. They simply weren't rooted deep enough into the community nor had they the pull and influence that would inspire the naming of a $40,000.00 school.
The facts have to do with the new Granite School District Board of Directors, who or what they wanted to honor at that time, and the influence Daniel C. Jackling, the president of the Utah Copper Company, had on Pleasant Green.


Being classically inclined, Jackling, there is no mystery why the word "Cyprus" is associated in relation to his interests in Pleasant Green and would directly or indirectly influence the naming of a school in Pleasant Green; after all, he had named his steamer yacht (in which he sailed the ocean blue like a pirate) "Cyprus," and he had named his personal rail car (much like today's private jet) "Cyprus." For the words Aes Cyprium (Latin) "Metal of Cyprus," Cuprum, or χαλκος κυπριος (Greek) "chalkos kuprios," held specific symbolic importance in his mind: the porphyry coppers had been mined on the island of Cyprus for six millennia and had sustained empires.
In a Salt Lake Tribune article dated January 1, 1914, a headline read: "Jackling Party is Sailing on the Deep" The article went on tell of the maiden voyage of the steam yacht "Cyprus" that "sailed from Los Angeles harbor...on one of the most luxurious cruises ever enjoyed in the Pacific coast waters. D. C. Jackling, millionaire copper king, and owner, with a party of fourteen guests, went on board.... Preparations were complete for weighing anchor at dawn. Mr. Jackling, as host, is giving a yachting party which exceeds in magnificence anything that has been carried out in the west. He will transport his guests to Panama on the Cyprus. There the yacht will be left, and by rail and steamer he will take them to Jamaica, Cuba and Florida, and return them to Los Angeles on his private car." --his private car also named "Cyprus."
In the society page pf the Salt Lake Herald dated May 3, 1915, it was reported that "Col. and Mrs. D. C. Jackling will arrive here tomorrow afternoon in their car 'Cyprus,' and will remain only twenty-four hours, leaving for San Francisco on Wednesday. A large dinner will be given in their honor tomorrow evening either at the Alta or Tennis club...."
In an article from the Salt Lake Telegram dated May 15, 1920, Colonel D. C. Jackling "arrived here with his family in their private car 'Cyprus' from San Francisco. The party immediately proceeded to Bingham and Garfield for an inspection trip to the smelters...."


The Junior High is Named


It's important to note what would seem to be an outside influence (besides the naming of Jackling's Magna concentrator and the new Magna post office) on the small community of Pleasant Green, how its very identity was being rapidly transformed, not from within, from the original generations of settlers, but once again from a body of individuals unconcerned and even ignorant of local history and heritage. What glittered like gold (or better copper) before their eyes was the past decade of new industry, a world renowned sulfuric tsunami washing over the once quiet community of pioneer farmers and ranchers. For this was not only the biggest copper milling facility in the world at the time, but it was already contributing to the war effort against Kaiser's Germany: World War I.
On the Tuesday evening of September 25, 1917, the Board of Directors for the Granite School District held a meeting, announcing the plans to construct a one-story junior high school in Pleasant Green--Magna already to the Tribune reporter and the board of directors. The building contract was awarded to Salt Lake contractors Kempa & Holchaw. State architect Richard Charles Watkins, who had planned and superintended the construction of hundreds of schools and other buildings throughout Utah, had drawn the plans and supervised the construction of Cyprus Junior High. The twelve-room building had an auditorium and the latest ventilation and heating of the time.
According to a Salt Lake Tribune article dated September 26, 1917, the name of the building would be "Cyprus, a term meaning copper, and significant of the copper workings in and near Magna."
As reported in the Salt Lake Herald, March 29, 1918, The new Cyprus Junior high opened for formal ceremonies Friday, March, 29, 1918 at eight o' clock pm with music performances in the new auditorium. Among the speakers included Granite School District Superintendent, John Martin Mills and president of the board of education, Delbert William Parratt, who would later become a Granite School District superintendent and a state senator.
Classes began on Monday, April 1st under the direction of principal J. J. Harris, 1918 - 1921. The new junior high drew 7th to 10th grade students from the Hawthorne school (which stood north and west across the street from today's vista school, directly in front of the old Vosnos property) and Magna Elementary (later known as Webster Elementary).
By then the red brick Coonville school (District 47) and Pleasant Green (across from the historic Pleasant Green ward building on Pleasant Green Main Street, approximately where the fire station stands) schools were no longer in use.


An Ever Evolving Campus, Even Then


Pleasant Green still didn't have a high school at this time. The eleventh and twelfth grade students  took the new Magna branch of the Salt Lake & Utah Railroad (popularly known as the "Orem" after W. C. Orem, president of the A. J. Orem company which built the line from Provo to Salt Lake and Granger and later from Granger to Pleasant Green.), and traveled the electric interurban line to West High School. Students from Garfield took the Salt Lake & Los Angeles railroad, which shouldn't be confused with the Utah & Nevada narrow gauge that brought mail to Pleasant Green and bathers to the Black Rock and Garfield resorts several decades before, and by then was buried under tailings. Twenty round trips on the "Orem" would cost the student $8.90.
This arrangement with the Salt Lake School District would be short lived. According to the History of Granite School District 1904 - 1976 by Marie E. Gooderham, the "Cyprus Grammar School" was "remodeled and changed to a high school in 1925." Students no longer traveled to West High School, but many students in the surrounding area, including Hunter, then took the "Orem" the other way, west, to the new Cyprus High School.
Note: Irene Hulse, in Rags to Riches, has the high school students being transported to "Granite High School." The remodel in 1925 to the high school added seven rooms. The gymnasium and manual arts building were added 1927 - 1928 and the auditorium was completed in 1928 - 1929. The home economics department and library were added in 1933 - 1934.
This was the building demolished in and rebuilt in 1983 - 1984 and currently stands as the "main building" today.


The Cyprus high school campus in 1937. Taylor Park Brockbank was the principal. 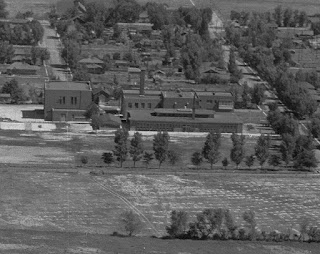 Down in Flames, Up from the Ashes 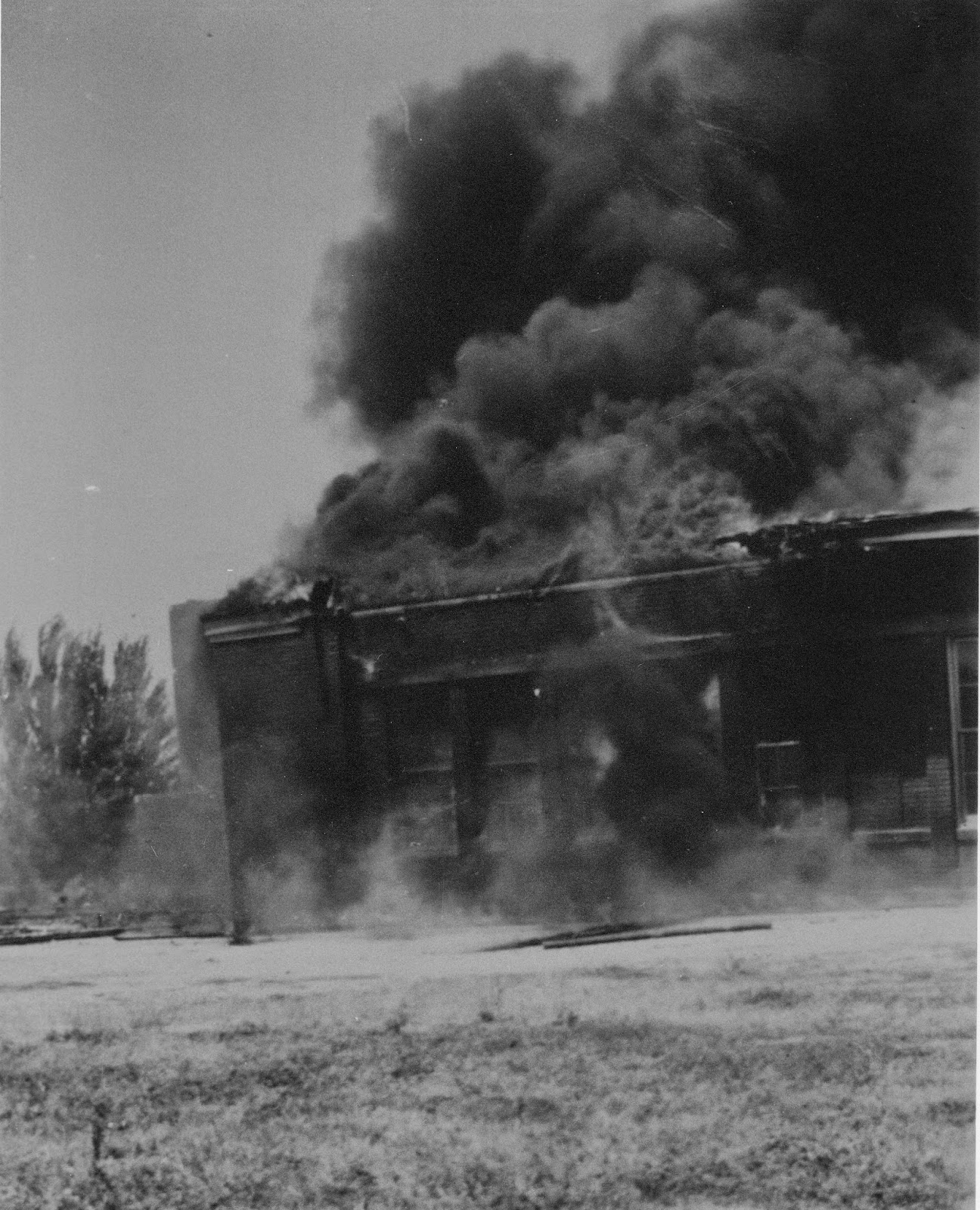 According to local oral history and also documented by Hulse, on July 24, 1947, during the Pioneer Day Celebrations that included a parade on Main Street, some boys were playing with fireworks near the Cyprus Junior High building. The building caught fire and burned to the ground in spite of efforts to save it. The high school addition was spared. 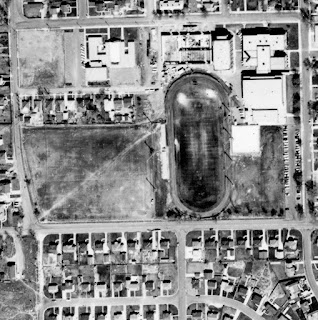 Cyprus high school campus from the air 1964.
Notice the industrial arts building is under construction. The old auditorium still stands next to it.

Portrait, genealogical and biographical record of the State of Utah : containing biographies of many well known citizens of the past and present (1902)