Magna parades stand out in the fun, generational memories of Magna residents. These are special times when neighbors and friends compete for shade and greet each other with smiles and enthusiastic hand shakes. It's hard to tell who's liberal or conservative or what religious creed they might hold to. You might see a Mormon helping support the Spaghetti dinner hosted by Our Lady of Lourdes Catholic Church or a baptist throwing in a few bucks to help local needy families. We all hold something in common, a love for our community and historical heritage.
A fictional Magna Forth of July parade (as it might have been in 1984) will appear in part III of my new serial novel, In Older Worlds. Magna itself, the physical setting not the people, will act as a setting for a strange, dark fantasy/horror. It's written in a way that a person who grew up in Magna at that time would recognize and understand. For those who have never seen Magna, it will be like an introduction to a great, personal friend.
I'd like to send out a special thank you to Todd and Carolyn Richards for your dedication and service to Magna and the Fourth of July committee--they even stored the Miss Magna float in their yard when no one else would take it!
As for these photos, taken today, with love, enjoy them! And God Bless.
Robert Goble

Great Britain Comes to Stage at the Empress with Oliver!

Theater guests familiar with one another greet each other with smiles, waves, and handshakes. It's a true community theater, and the intimate "family feeling" spreads to newcomers and out-of-towners eager to enjoy the classic British musical and generational Broadway smash by writer and composer Lionel Bart, Oliver! The lights dim, erasing the empty stage, and the music begins.
But just before, downstairs, under the stage, the scene was of actors and actresses, most young, a few old, for many their first play, dressing, singing, and preparing to give their all to delight the audience and carry them the Dickensian world of London in the 1850s.
"I see London as a dirty, gritty place," said Lila Cripps (ensemble and 'bit parts')...the people at that time were either very rich or very poor or working very hard. It would be a very difficult time to have to live that way, and I think it makes people nowadays open their eyes."
First-time Director, Becky Walk, hovered near as the actors gathered in the theater before the guests' arrival. Having done musical theater in college, she fell in love with the "cute little community theater" where the "people are awesome." When Becky had heard the Empress needed a director for Oliver! her sister and the play's choreographer talked her into joining. She took her role seriously, researching the "old town London," the costumes and the music and much more. Already familiar with the play, having been a fan since she was a kid, directing the show was a "neat" experience that took a lot of dedication, especially keeping the large cast of kids on task, "but they've really done a good job."
The actors made a circle on the stage floor and took each other by the hand, linking the wide circle, a bonding moment.
Though many of the actors and actresses were regulars at the theater, Michael Johnson (Bill Sykes), a student of the Actor Training Program in the Department of Theatre at the University of Utah, had "never seen a show or been in a show" before at the empress. "I walked into this theater," Michael said, "and absolutely fell in love with it. I love the space, like just the way it’s set up. And downstairs...the dressing rooms...everything it’s just perfect. It’s a great atmosphere I love the people who work here. Its been awesome"
Actress Valerie Packer (Nancy), also her first time at the Empress said, "It's so fun. Its such an intimate setting. The audience can see your facial expressions, and I think (they) get a better feel for your character." She had dreamed of playing the role of Nancy since her mother had played the same role "when she was my age."
Next door the sound of power tools drifted into the street. By then the play had run to intermission and the sun cut its last rays over the golden peaks of the Oquirrh Mountains. As guests filled the foyer and bought goodies, the kind of goodies that made the musical even better, Bennie Nugter worked in the "Toy Shop" building a new wooden ladder for the theater. For Bennie the Empress was a family endeavor. His wife, Marie, was backstage working on props, while their son and daughter, both actors, prepared for the second act.
Bennie, not a resident of Magna, spoke proudly of his family's dedication to the theater. His daughter, Sasha (Charlotte) "was in every show last year one way or another. She auditioned for all the shows that she could audition for. Some she got in and some she didn’t, and the ones that she didn’t get in, like Forever Plaid was all guys, she actually did lights. Ever since she was a little kid she’s been a little theater bug and she doesn’t mind getting up in front of people and going into character."
Behind him on the wall were drawings of scenery, one of a hob fireplace and a brick hearth with a "secret compartment," a fireplace he'd dedicated many hours of work to, the same fireplace Brett Hanson (Fagin) hunched over with suspicious eyes glancing about for witnesses as he sang, "Reviewing the Situation."

In the afterglow of a musical well done, as the audience slowly moved into the foyer and out into hot summer night and and the shining streetlights to meet the actors (an enjoyable tradition that hopefully will last for many years to come), Leora Thomas of Salt Lake City walked to her car. "I'm really hooked on this theater, and it brings a lot of memories back to me. My husband was from Garfield. We come out quite often to see the plays here and we enjoy every one of them, which is fantastic!"
Oliver! runs through July 21, 2012. Visit the Empress Theater website for more information on the coming Beauty and the Beast, Jr.; Hello, Dolly; and The Christmas Box and many more. 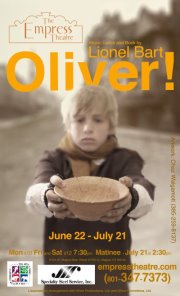