Magna Arctic Circle to be demolished and rebuilt.

A time of change.


Affectionately known by the locals as the "A/C Greasy," this particular Arctic Circle had weathered more than four decades as a Magna, Utah landmark. During the summers, it was the destination for many a thirsty kid on bicycle or on foot, a watering hole for a Lime Ricky or a courtesy cup of water--if you'd rather have used your pocket change to afford an ice cream or some fries. It was the place to stop between the library and home. It was the hang-out during all the many summer car shows. Maybe, after all, you had to make that quick trip to the outside restrooms--how can I not mention those darn restrooms?


It had been the place for part-time work for many Cyprus High School students. Kemari Rawlings had worked there in the early in the early nineteen-eighties. She laughingly remembers the brown polyester uniforms with the orange rainbow. Speaking of the importance of the job to her at that time, she said:
"It paid for Madrigals. I wouldn't have been able to go on a mission to Japan or anything. After my mission, my mom asked, 'what do you want to eat? I'll bring it to the airport.' All I wanted was a chicken filet sandwich with cheese and tomato and extra white sauce, and a diet Pepsi. It was to die for. She thought it was some kind of joke."
In a strange way, I imagine Kemari's experience wasn't unique. It was a part of coming home, of reconnecting with something (though not unique to Magna itself) that was a part of the experience of living in Magna: this particular Arctic Circle. It was a "Magna" experience as much as the old Pizza Stop, Grub Box,  Ken's Sandwich Shop, or the Taco Time--Ken's being the last of the aforementioned standing.
Years ago, I picked up a friend of mine, Robert Hosford, from the airport. After he'd spent a long period of time away from home, working in Chicago, I'd asked him the same thing: what did he want to eat?
"Take me to Arctic Circle. I want a Ranch Burger," he said.
Michael Goble, who now lives in Texas, had worked there in the mid-nineties.When he heard about the demolition, he jokingly said, "It's good that the lousy high school work memories will be torn down.... It was my first job. It was cool for a while and the food was good, until I needed more money. After two years I'd had enough of it. it's kind of sad to see it go, because it's a piece of Magna history. Good thing we stopped there with the family last time we were in Utah."

Very few folks can remember what this area was before Arbor Park came along. Ernie Gust remembers his family's home along 3500 south, and, not far away, the original Arctic Circle, another burger place built not far to the west in the nineteen-fifties.
"The home used to stand where the right lane of the road is today," he says.
I recall my grandmother, Evelyn Sadler Goble, could remember when all that property was still a part of Coonville and how the Lucerne (old British name for alfalfa) used to stretch south of the dirt crossroads (the corner of 3500 South and 8400 West. For a time, 3500 South was the main way to Salt Lake City--there wasn't a highway 201.
Soon the old Arctic Circle building will be brought to rubble, as nearly all the rest of Arbor Park. It's concrete pillars and tight drive-up window will be but a memory, much as the old Smith's Food King, Sprouse Reitz, Library, The Best Shop, Thrifty's (which later became the Reel Movie Theater).
What was most special about this particular Arctic Circle (besides the individual memories of those who grew up in Magna) were the unique paintings that adorned the upper walls in the eating area. It was a place to sit and contemplate Magna history and look out at the Oquirrh Mountains at sunset (if sitting at the west windows), or looking out at Antelope Island and the distant Wasatch Mountains (if sitting at the north Windows). You night have done just that: contemplated the Magna history in the paintings, but did you know where the inspiration for the paintings had come from?


So just for fun, I'd like to point out a very big boo boo. 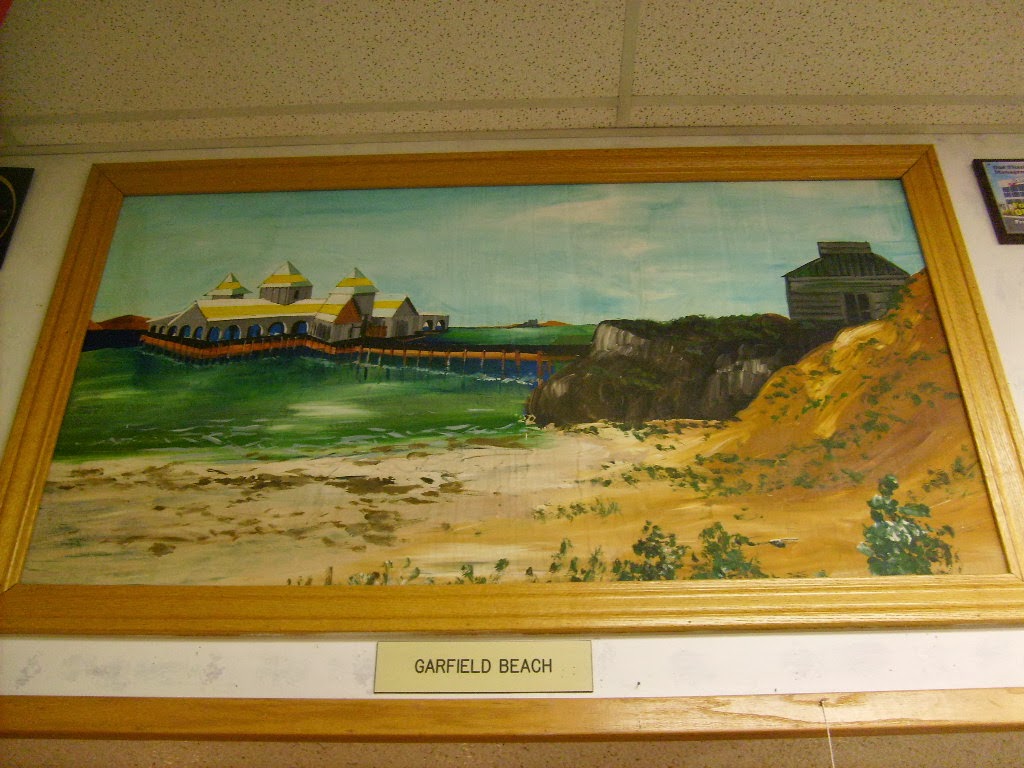